When I arrived in London 5 years ago, I didn't know the city at all, so looking for a place to live promised to be a tricky task. I asked advice from my colleagues and also the very few people I already knew in London (which was 2; La petite Soiz and her British Boyfriend)

I quickly found out that everyone had a say (= a strong opinion) of where I should live. Soiz sent me a detailed and absolutely obscure email filled with secret codes like " you want to be in NW or EC, but avoid SW" (I didn't want to look stupid at the time so I didn't say anything, but I only understood 2 months later that she was referring to London areas by their postcodes)
Her boyfriend, a born and bred Londoner, was adamant: wherever I was to settle had to be north of the river Thames. I wasn't sure why, but it seemed that living south of the river implied that you were some kind of "fake" Londoner (not to say a loser).

Eventually, I found a place in the North West of London, in zone 2, which was close enough to my job and I assumed consequently on the right side of the tracks river (sigh of relief).

As time passed by, I gradually understood how your neighbourhood plays a big role in socially defining who you are as a Londoner, and how you actually become a girl/guy from North London or South London - whether you like it or not - and that once you've picked a side of the river, chances are you'll probably never cross it again.

If you live in Hackney or Bethnal Green, you're a hipster

Well, never say never; so after having been a NW (North West) girl for 5 years, in a few weeks I'll cross the big river and become a SE (South East) Londoner.
More on that later! 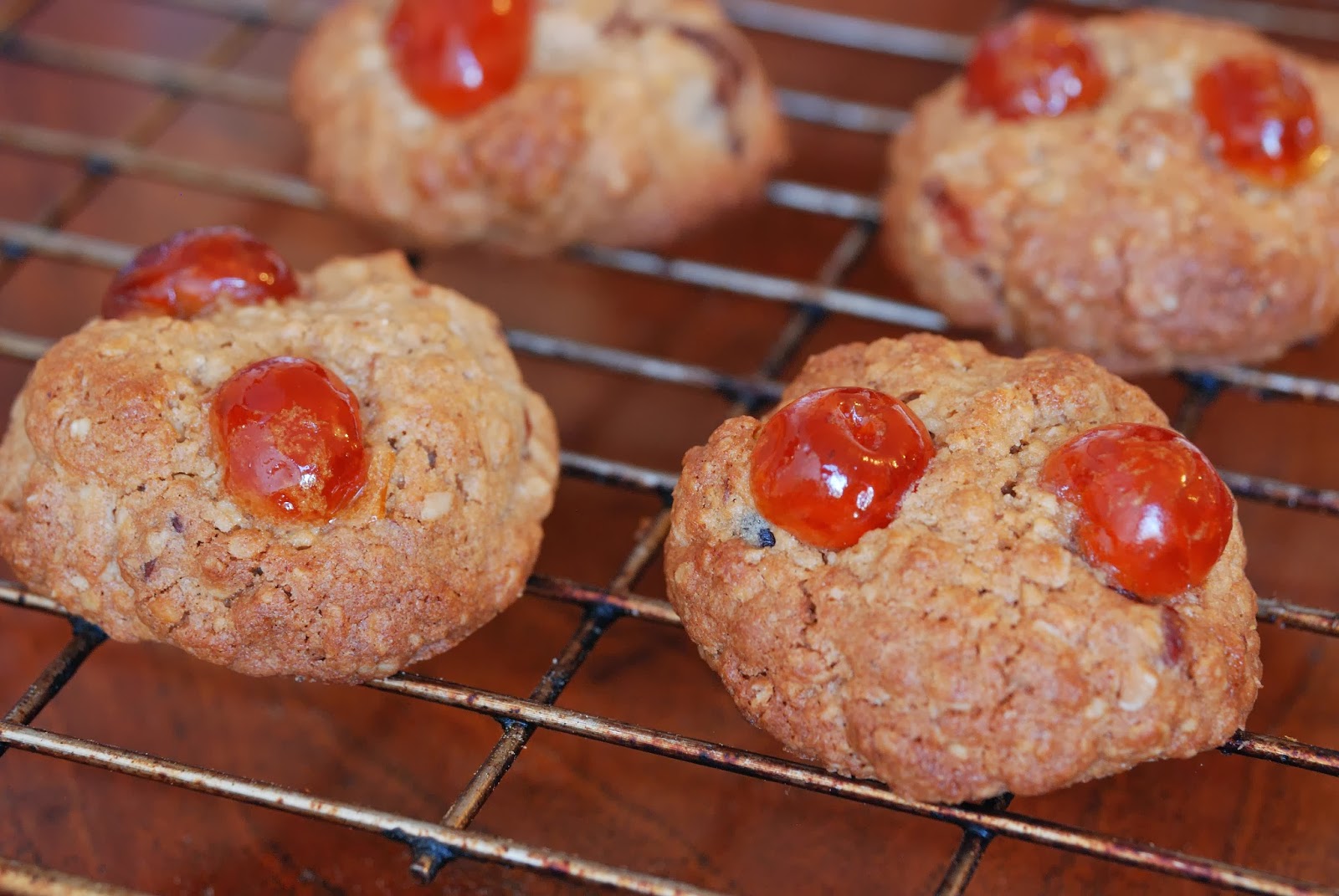 You're going to think that I'm really into glacé cherries these days, which I kind of am, just because it's one of the products I work with and therefor I've discovered lots of cool recipes using it in a different way.
This recipe has been developed by Anthony Kindred, Master Baker and owner of Kindred Bakery in London, and I like it so much that I haven't adapted it yet.
I surely will in the future, but for the moment I'm content with the original version!

Method
1/ Pre heat oven to 190c
2/ Cream the sugars and butter, and then add the vanilla extract
3/ Beat in the eggs, one at a time
4/ Sieve the flour, salt and baking powder and gently add to the mix. Do not over mix
5/ Stir in the oats, pecan nuts and French glacé cherries
6/ Line a baking tray with baking parchment
7/ Divide mix into balls between 40-80g depending on preference and space out on a prepared tray leaving 25mm between each one, pressing down slightly
8/ Bake for about 15 mins until golden around the edge. Leave to cool for 15 mins before transferring to cooling wire and leave to cool completely before storing in a cookie jar.

Tips:
Why weighing each cookie individually before baking? to ensure they all are the same size and will therefor cook at the same speed. This will ensure consistent cookies!
Why waiting for the cookies to cool completely before storing them in a jar? Because otherwise they will release steam in the jar and become soft.

Different sizes for different cookies: the bigger the cookies, the more soft in the middle and crunchy on the edges. Small cookies will be crunchy all way through 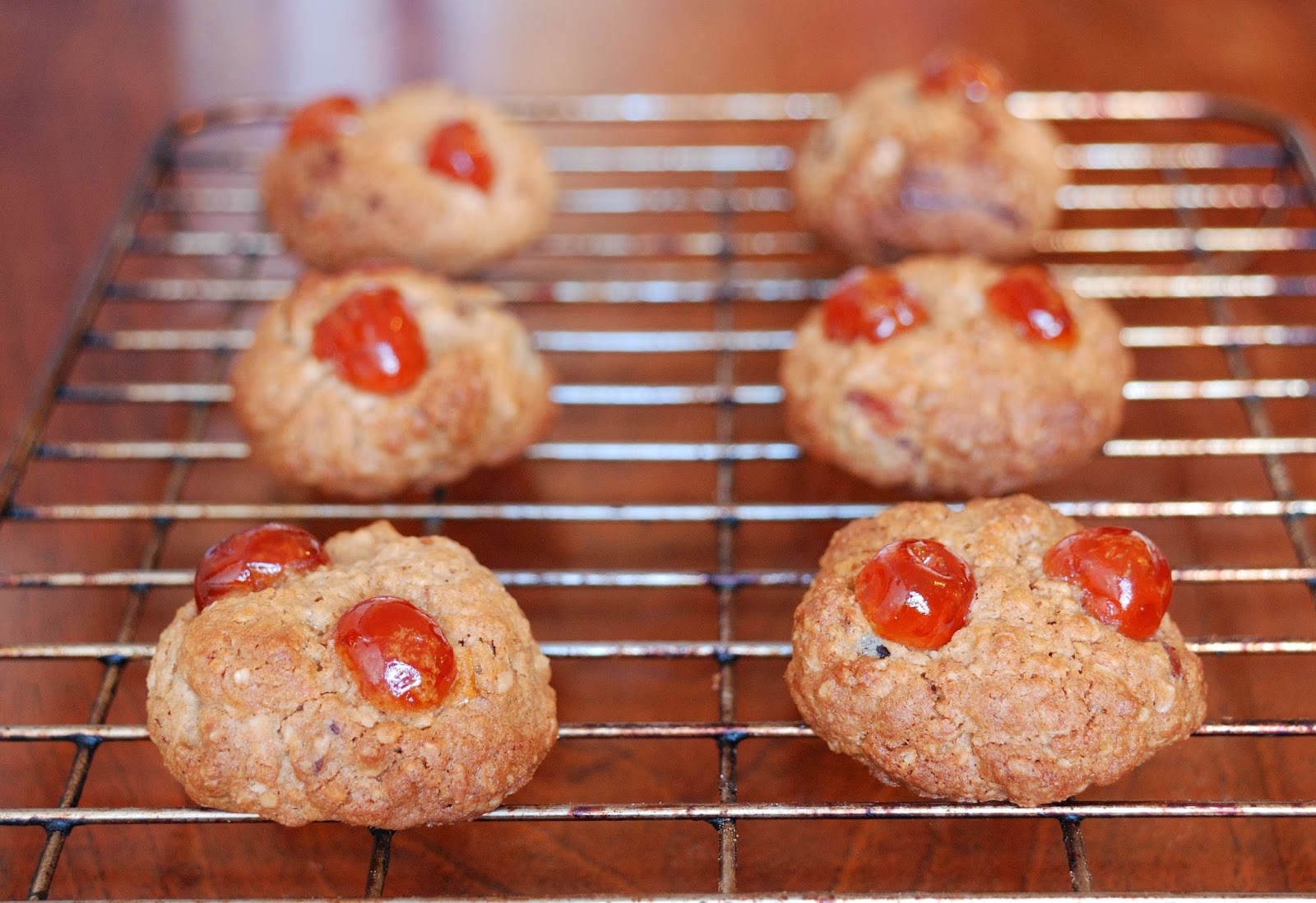 This post is dedicated to La Ptite Soiz, my London mentor ;-)
Posted by Pauline at 08:52 No comments:

Almost five years ago to the day, I arrived in London with my suitcase to start a new life.

Despite my fears and doubts, it didn't take me long to realise that it was the best decision I'd ever made.
Looking back, it's true that time really flies, as so much has happened in those 5 years.


There's an urban legend going around London expats that says your 5th anniversary is decisive. If you don't go home after 5 years, then you'll stay in London for your the rest of your life. I don't know what's going to happen in the future, but for now, I'm not going anywhere! 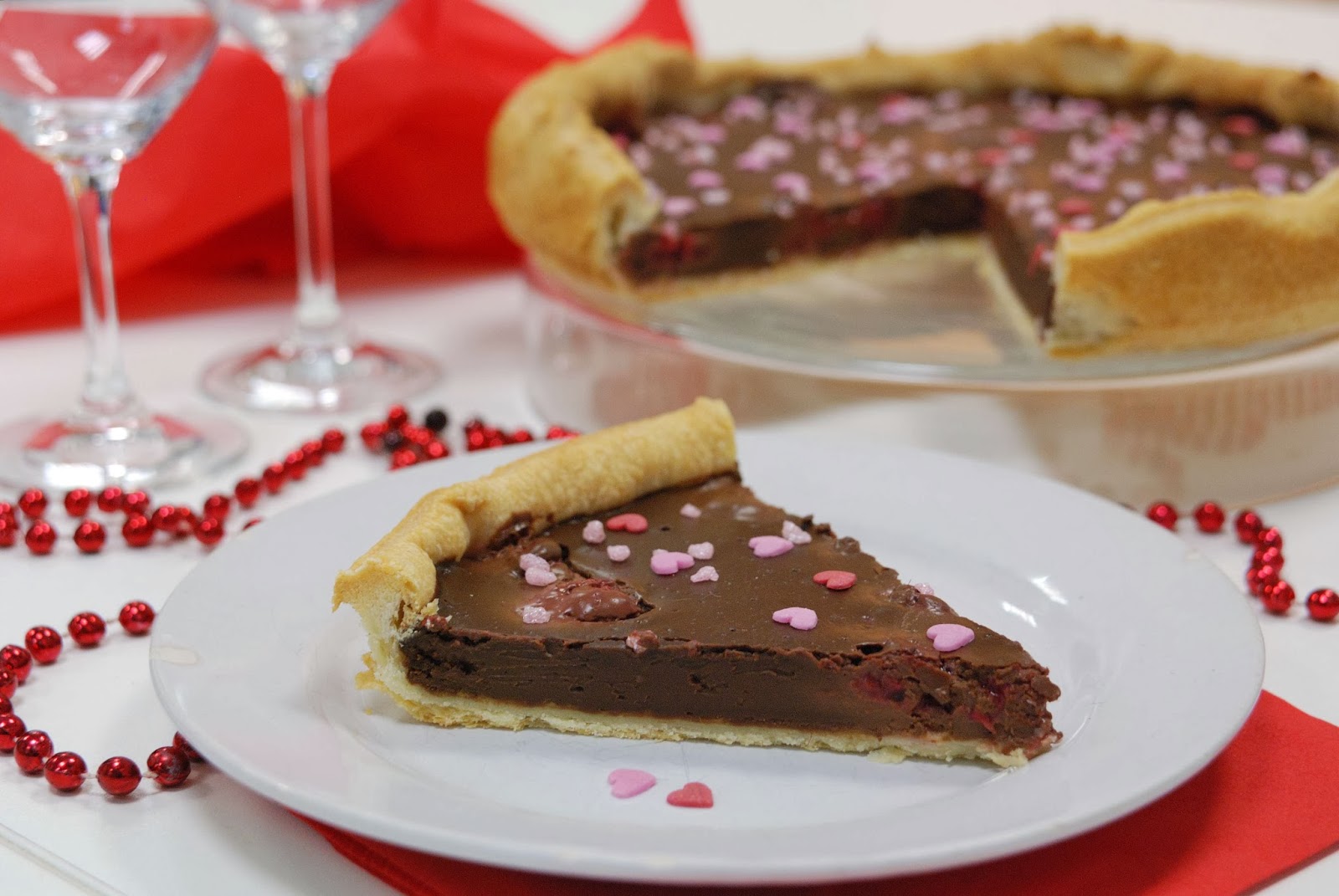 Whether you choose to add raspberries or banana, any other fruit in this tart, or to keep it 100% chocolatey, you won't be disappointed. I was waiting for such a creamy and rich delight to come into my life, and now that I found it, I won't let it go!

Make the chocolate and raspberry tart

1/ Line a pie dish with the shortcrust pastry, prick it all over and refrigerate for 15 min.

2/ Once well chilled, cover with baking parchment and baking beans and bake for 10/12 min until just golden. Leave to cool.

3/ In the meantime, make the filling. In a saucepan, pour the cream and the sugar, and bring to the boil. Turn off the heat.

5/ Scatter the raspberries all over the pastry case (apart from a few that you'll keep for decoration) and pour over the raspberries the chocolate mixture. Bake again the tart for 10min until the sides are set and the middle still a little wobbly.

6/ Leave to cool completely, decorate with the raspberries kept aside, and serve.

Adapted from Jamie Oliver's magazine.
Posted by Pauline at 08:48 No comments:

Bloody tricky Valentine's day.
You play it cool, pretend you absolutely don't care about Valentine's day, still secretly hoping that a Valentine's card or flowers will appear in your lounge on Friday night.
The Man, for all his amazing qualities, has shown that he's a man like many others though: he can't read your mind.
So what do you do?
You bake a cake.
Cake is always a good answer to life's many dilemmas. 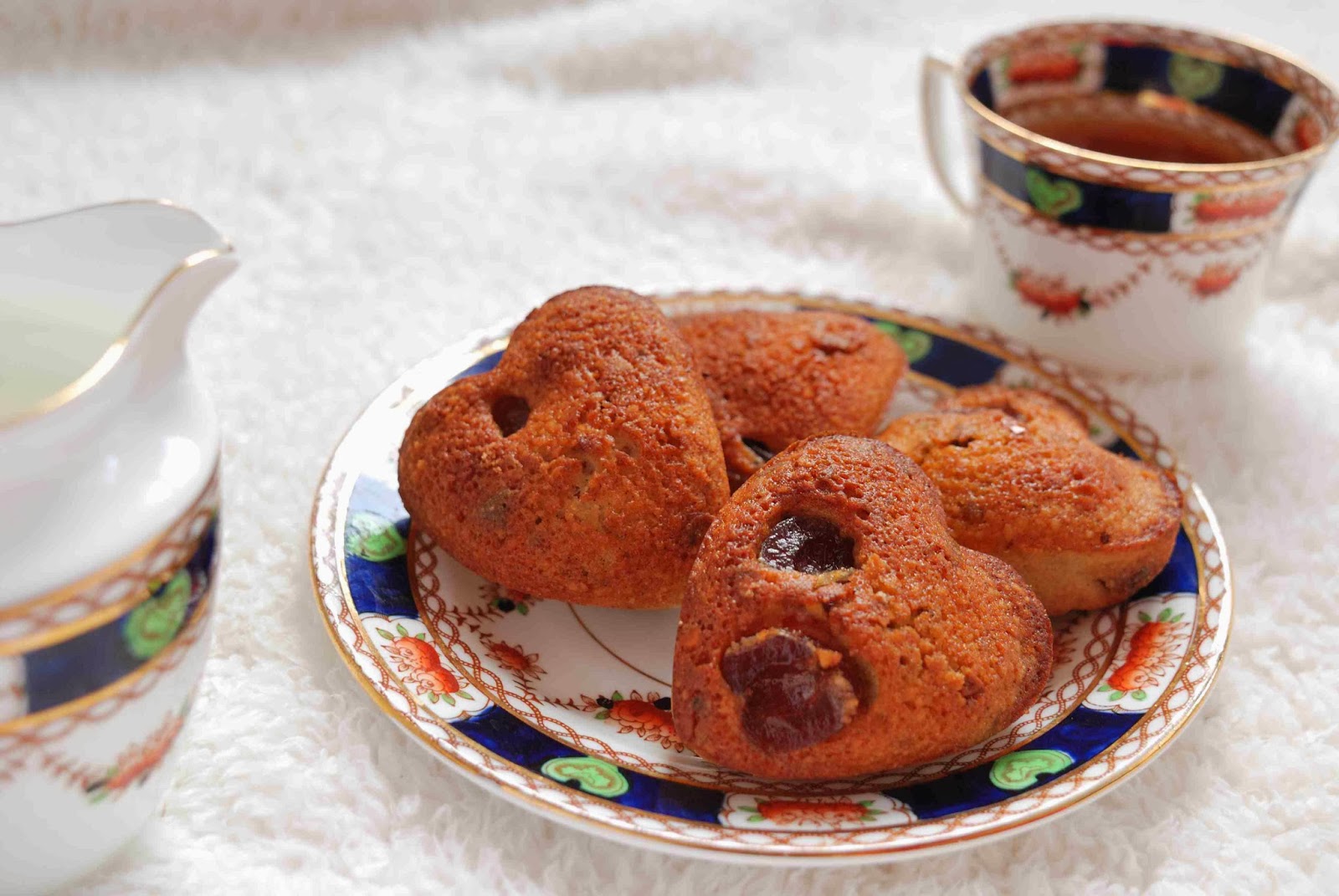 French glacé cherry and pistachios financiers
Financiers are little almond cakes, often called "friands" in the UK. They usually are very nice. But this version, developed by Cindy from Petit Gâteau, one of my favourite bakers in London, is one step higher in cake heaven.
Pistachios and French glacé cherries (you'll find 100% natural ones in most supermarkets) are an amazing addition to these little wonders.
Trouble is you'll probably find you want to eat more than one!

2/ In a large bowl, mix together flour, ground almonds and sugar.

3/ In a pan, melt the butter over medium heat until it turns golden brown. Then pour over the dry ingredients and mix everything together with a spatula or a wooden spoon.

4/ Add the egg whites and vanilla paste, and mix thoroughly.

5/ Pour the batter into a financier or muffin baking tin.

6/ Add pistachios and FrenchGlacé Cherries halves into each financier (dividing the total quantity between the 8 mini cakes).

8/ Let cool down for 5 minutes before removing from the tin/mould and cool down completely on a wire rack before eating.

I've been told that Coronation Chicken is a bit of an old-fashioned dish. A blast from the past.
So if you do talk to me about Coronation Chicken, I immediately imagine myself sitting at an old wooden table, taking part in a street party during the 70s, wearing flared trousers, a flower power shirt and surrounded by kids with page boy haircuts running around.

Although I only discovered it a couple of years ago, it has a very specific place in the image I have of my parents lives when they were my age. (Even though my parents never ate Coronation Chicken and aren't British, they did wear flared trousers).

Invented 60 years ago for the coronation of Queen Elizabeth II, coronation chicken belongs to one of these Indian inspired, traditional British dishes, created to represent the British Empire. A big hit at its creation, it still is one of Britain's all time favourite picnic dishes and sandwich fillings.

In my quest to discover and experience traditional British cuisine, I couldn't not give it a try! 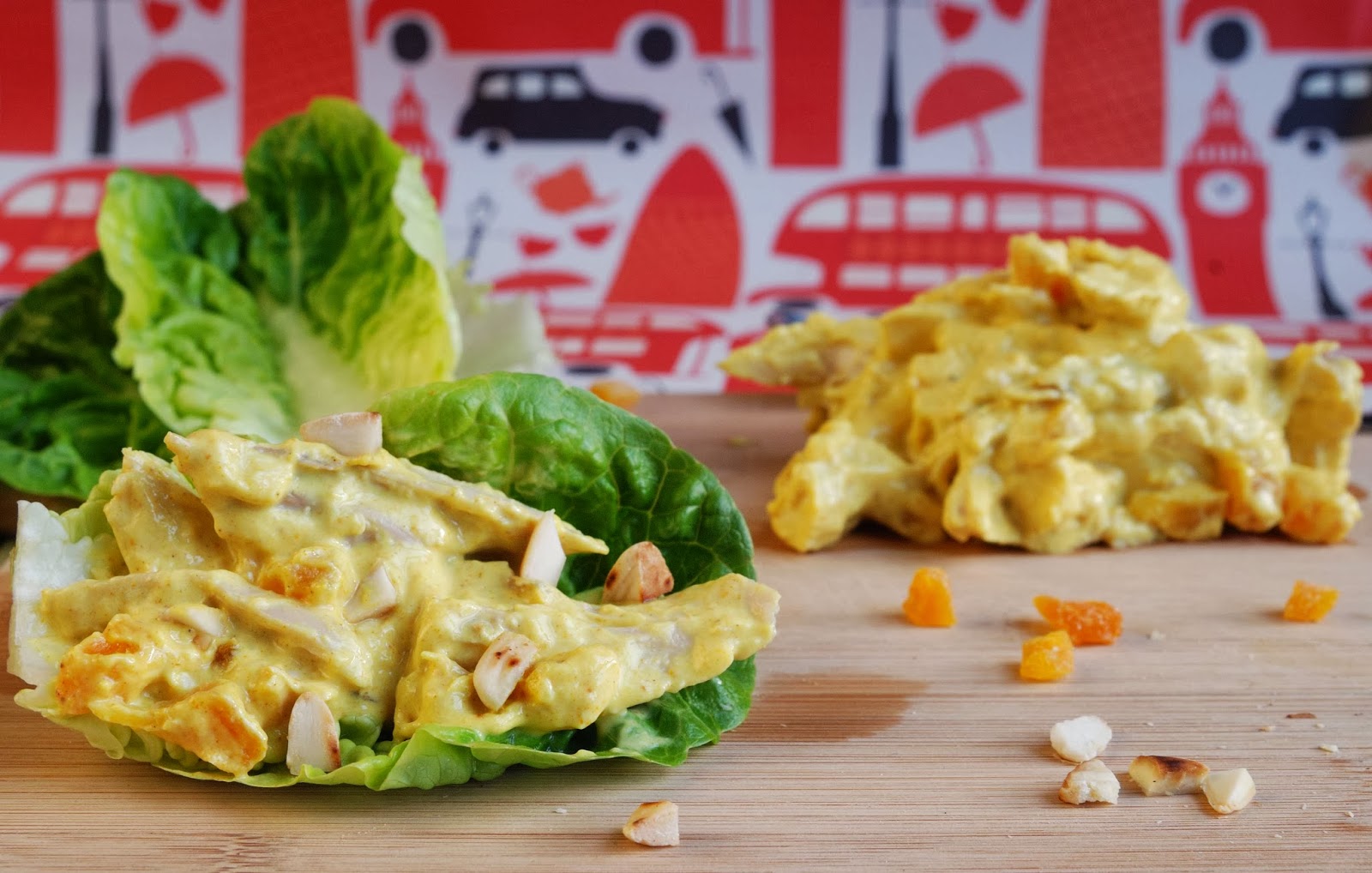 Coronation Chicken
As I never do as I'm told, I surfed the web for days to look at all the recipes I could find and picked things I liked here and there to create my own take on this recipe.
It's a light version of the recipe, as I used half of yogurt and half mayonnaise.

1/ In a small dry pan, toast the curry powder for a few minutes, until golden (it will prevent it from bringing a harsh taste to the dish). Pour the powder in a small bowl and leave aside.

2/ In the pan again, toast the almonds dry until golden brown. Leave aside.

5/ To serve : I served the coronation chicken in baby gem lettuce leaves that I used as wraps, sprinkling some toasted almonds on top of each wrap just before serving. 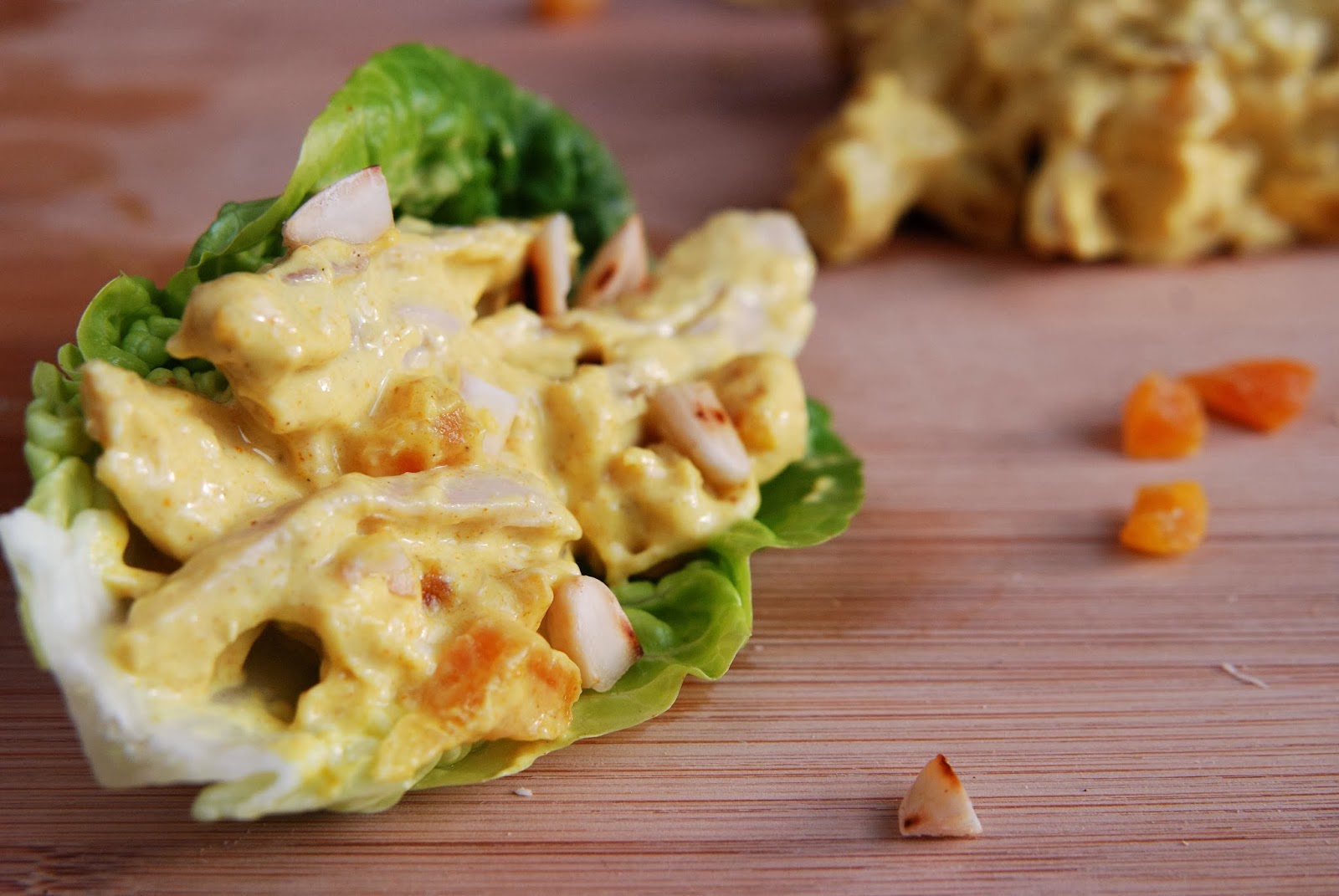