The day Mr Muffin came into my life

I have always liked cooking.
When I was a kid, I used to spend hours watching my step mum cook and bake.
And on Sunday mornings, with my brother Bertrand, we used to make pancakes before our older sisters woke up as a surprise breakfast.
But to be honest, oustide chocolate mousse and chocolate tart (in my family, you have to like chocolate and to know how to make some basic desserts with it, this is not open for discussion), I was not really interested in baking.
I'd love eating desserts of course (I really have a sweet tooth), but I'd rather leave my dear friends Ryan, La Laitière or Miko (industrial desserts manufacturers) or the pastry shops make them for me.
But then...everything changed...the day I arrived to London.
From supermarket aisles to Starbuck coffee counters, United Kingdom can fullfill all one's dreams of junk food.
It is, the United Universal Kingdom of Junk / Indulgent Food
(and from somebody who can easily spend 2 hours in an M&Ms store, I can guarantee this is big a compliment)
So here I was, immigrating to the homeland of oatcakes, scones and caramel shortbreads, feeling like Alice in Wonderland and I could not wait to try every one of all the delicacies of my "new country".
Flapjacks, cheesecakes, muffins; banoffee pies...2 months later, I was still far away from having tried half of what the Kingdom of Baking has to offer, and I was getting fatter everyday.

And, truth be told, I was luring at the Super Power.
Yes, you name it : The Super Power that makes you create Cakes-that-make-you-fill-so-guilty-but-that-are-so-indulgent-at-the-same-time-that-you-could-literally-have-a-food-orgasm-on-the-spot.
(what, you don't know about food orgasms? Either you lie or you haven't really lived yet! 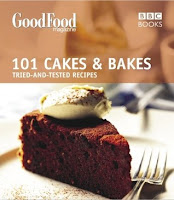 In both cases, I'll give you a shortcut to my favorite food orgasmic foods in London in a next post)
So, there was only one thing for me to do: I popped at WS Smith round the corner and bought myself my very first British Baking Book (an easy one to start with) : BBC Good Food's 101 Cakes and Bakes.
I also registered to a gym (I was about to go on a tremendous calories creating and eating process for at least few months, so that came quickly clear as a definitive necessity), and I started baking!

Every friday from now on, I would bring to work a traditional British cake that I had made myself.
What was soon to become the Friday Cake tradition had just came to life.
Posted by Pauline at 14:48