Cheesecake: the real reason why the Romans invaded Greece

The first memory I have of cheesecake was on TV.
Friends, Rachel and Chandler crawling on the floor with spoons, eating the neighbour’s cheesecake that fell on the floor in the corridor (Hello, my name is Pauline and I’m a TV addict!)
When I was a teenager, cheesecake belonged to these amazing foods I used to see on American TV series and dream of while stuffing myself with Marrons Suisses (chestnut mousse)
15 years or so later, I had cheesecake for the first time and God that was so good…well worth the wait.

Geek information: Ancient Greeks baked cheesecake (no wonder Romans wanted to invade them so badly). In 1912, an American called Mr Kraft invented a cream cheese called Philadelphia, which has since become the most common cheesecake filling base.
Today, each country offers different variations on cheesecake fillings: ricotta or mascarpone in Italy, quark in Germany, cottage cheese in the UK, cream cheese in the US, etc. Ok…back to the real business.

There are two main categories of cheesecakes:
- baked: the filling based on cheese + eggs + sugar (using caster sugar or condensed milk for example) is cooked before being chilled and served. The star baked cheesecake is the traditional New York cheesecake. Its texture is creamy, dense, almost heavy but divine.
Best served under a blanket with a good movie on a Sunday afternoon. It’s the quintessential comfort food.
- chilled: the filling based on cheese + sugar + often gelatine is chilled before served. Its texture is lighter that its fellow baked cheesecake. 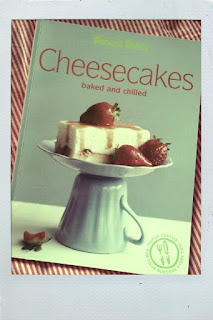 Best served for dessert on a first date (or in the final of Come Dine With Me). Mini-cheesecakes made with cooking rings are perfect for showing off and pleasing crowds!
In both cases, the crust is usually either made of crumbled digestive biscuits (re-combined with butter, because there is not really enough butter in digestive biscuits) or a homemade short crust pastry.

If you could take only one book about cheesecakes on a desert (dessert?) island, I would recommend Cheesecakes, baked and chilled by Women’s Weekly. Its 50 or so recipes take you through many easy-to-make and delicious variations of baked and chilled cheesecakes.
Once you’ve understood the main constraints and tricks for both categories of cheesecake, you can be creative and go wild. There are endless variations of cheesecakes and your chances of messing it up are quite low.

Chilled ginger cheesecake
The freshness of smoothness of its filling goes amazingly well with the kick of ginger. The candied ginger acts like mini-flavoured bombs, I love it.
The ginger syrup added to the crust makes it slightly caramelized, and almost crunchy. 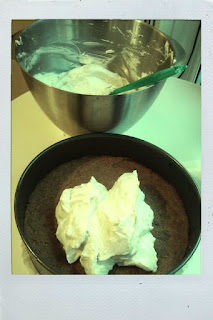 Ingredients:
For the crust:
-12 gingersnaps
-30g melted unsalted butter
-1 tbsp of ginger syrup (from a jar of stem ginger in syrup) 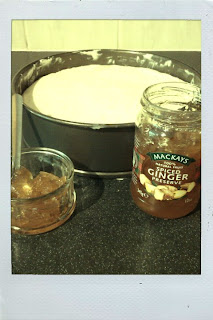 Prepare all your ingredients and take the cream cheese and double cream out of the fridge.

Make the crust:
1. Preheat the oven at 150deg C. Cover the base of a loose-bake cake tin (approx 22cm diam) with baking parchment
2. Crush the biscuits to fine crumbs either by whizzing in a food processor or put them into a polythene bag and bashing them with a rolling pin. Transfer to a bowl and stir in the melted butter and the ginger syrup. Spoon this mixture into the base of the tin, pressing the biscuit well into the base (with the bottom of a glass for example).
3. Bake in the oven for 10min or until golden. Leave to cool completely

Optional icing:
2 hours before serving, heat the spiced ginger jam in a small bowl in the microwave for 30 sec to soften it. Brush the top of the cheesecake evenly with jam.
Put back in the fridge.
Before serving, remove from the tin and carefully peel off the parchment.

NB: I know the pictures on my blog are not good yet but please bear with me, I promise I'll sort something out very soon. In the meantime, please try the recipe, I swear it looks amazing in real life :-)
And as a proof : a picture from Adeline who tried my recipe! (I am so proud!) I love the UK flag and the sweets, it's so cute! 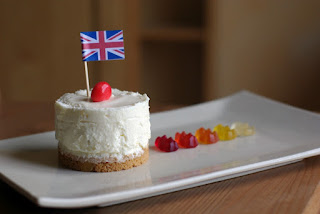 Please do not hesitate to send me pictures of the cakes you've tried too! :-)