The cupcake is dead, long live the whoopie pie!

Right, a London girls afternoon out must include a trip to The Hummingbird Bakery and the purchase of red velvet cupcakes while secretly hoping you'll bump into Gwyneth and her kids because, hey, you are so cool. But the truth is the cupcake is like the pretty girls most of us used to hate in high school; it’s beautiful but it’s dull.
Yes, I do dare saying it : a cupcake is nothing more than a muffin deprived from what made it good (chocolate chips, fruit chunks, nuts, etc) and on top of which you’ve just added a unreasonable layer of lovely yet boring icing.
On the other hand, a whoopie pie combines the benefits of a cookie, a cake… and even a cupcake. It’s not a double, but a triple rainbow.
For those who don’t know it yet, a whoopie pie is made of two indulgent cookies/mini cakes sandwiched together by marshmallow fluff or other kinds of cream cheese filling / butter cream. Yes, it a kind of evil macaroon, but easier to make.
﻿
﻿

You can change the cookie base or the filling; you can dip them into melted chocolate; you can roll the edges in sprinkles…there is no limit to your imagination. And they taste better than a cupcake.


By the way, whoopie pies come from the US. The Amish mums used to bake them for their husbands and children who would shout “whoopie!” while discovering them in their lunch boxes.
After cheesecake, whoopie pies… You are probably wondering whether this blog is genuinely going to be about British Baking, hey?
Actually, I got passionate about all cakes I discovered here in the UK. Compared to French gastronomy, which I find generally quite self centred, British baking culture and gastronomy is a wonderful melting pot of traditional local dishes and foreign influences. As I have eaten only French food for most of my life, I find it very exciting. (As I always say, living abroad is like an everyday small adventure, and embracing local food culture is part of it).
So going back to my point, my blog does is not only inspired by traditional British baking, but also by all the other amazing foods the UK has imported from all over the world.
I did buy my American book about whoopie pies in the US though (a souvenir from my holidays in NYC): Whoopie pies, by Sarah Billingsley and Amy Treadwell.  I think this book is a very good starting point to explore these lovely little treats and you can buy it from amazon.
To be entirely honest, I baked these whoopie pies while cooking dinner and chatting with friends, which resulted in me forgetting altogether to put sugar into the dough. (I’m not very good at doing several things at the same time). You’ll guess what happened next: adding the sugar at the last minute, I over-beat the dough. The whoopie pies were consequently very dry and got renamed by my friends The Chocolate Poopie Pies (which made us laugh all night). But trust me, if you don’t mess up with the recipe, these are amazing!
So if you too want to be as cool and lovely as Gwyneth, stop buying cupcakes and make whoopie pies!

Ingredients for the whoopies: (for approx 15 assembled whoopie pies, depending on how big you’ll make them)
1 2/3 cups all purpose flour
2/3 cups unsweetened cocoa powder 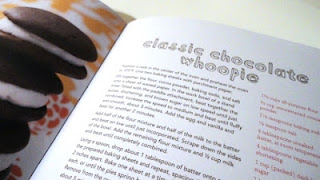 1 ½ tsp baking soda
½ tsp salt
4 tbsp unsalted butter, at room temperature
4 tablespoons vegetable shortening
1 cup dark brown sugar, packed
1 large egg
1 tsp vanilla extract
1 cup milk
Make the whoopies:
1/ Heat the oven at 210°C and line baking parchment sheets on 2 baking trays.
2/ Sift together the flour, cocoa powder, baking soda, salt.
3/ In a big bowl, beat together (with an electric hand mixer or in the bowl of a stand mixer) the butter, shortening, and brown sugar on low speed first until just combined, then on a higher speed until smooth and fluffy for about 3 min.
4/ Add the egg and vanilla and beat for another 2 min.
5/ Add half of the flour mixture and half of the milk to the batter and beat on low speed until just incorporated (be careful to beat you batter as little as possible to ensure it stays moist). Scrap down the sides of your bowl and add the second half of flour mixture and milk, and beat slowly until completely combined. If you are not sure; you’d better do this with a wooden spoon, and beat everything together until combined.
6/ Using a spoon or a piping bag, drop about 1 tbsp of batter onto one of the prepared baking sheets and repeat spacing them at least 3cm apart. Bake one sheet at a time for approx 10 min each or until the pies spring back when pressed gently.
Remove from the oven and let the cakes cool on the sheet for about 5 min before transferring to a cooling rack to cool completely. 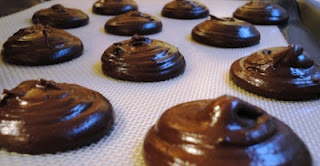 Ingredients for the cream cheese filling: 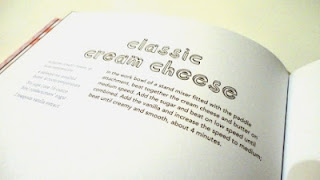 150g cream cheese, at room temperature
4 tbsp unsalted butter, at room temperature
3 cups icing sugar
1 tsp vanilla extract
Make the cream cheese filling
In a bowl, beat together the cream cheese and butter on low speed until combined. Add the sugar and the vanilla and beat on high speed, at least 4 minutes. The longer, the better! Your filling will be lighter and fluffier.
Assemble the whoopie pies
Drop a generous spoonful of filling on a whoopie, and sandwich another whoopie on top, pressing gently until the filling comes to the edges. 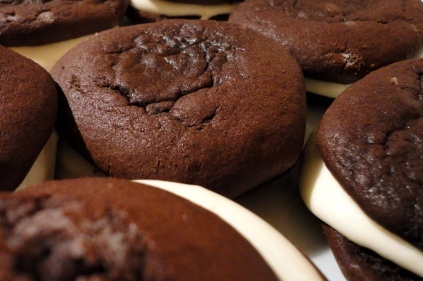 Option Death by chocolate:
You can drop half of each assembled whoopie in melted dark chocolate (or white chocolate). Leave the whoopies to dry on a cooling rack.
Or, roll the edges of the whoopie pies in mini chocolate chunks.